Fleet Admiral Jonas Ingram Stryker is a character in Wes Imlay stories, and include The Devil You Know and is mention in Libran (Story), Survived of the Battlestar Victorious (Story). Stryker's thought of as being the father of the Colonial Navy and Fleet but also of the Colonial Military and is the only officer held in high regard by all branches of the Colonial Military. He is also strongly hated by the Cylon.

Jonas Ingram Stryker was born on Aquaria ninety nine years before the fall of the colonies. At the time of Cylon revolt he was a Colonel and the executive officer on the Aquaria Battleship Aquarius. After the death of the commanding officers, Commander Alan Wallace, Colonel Stryker assumed command and helped to halt the Cylon attack agaisnt Aquaria. Admiral Stryker is later put in command of the combined colonies fleet.

Early in the war, each colony learned that alone they couldn't defeat the Cylons. Admiral Stryker thought up a a radical idea to created a single combined Military, his name for it wasColonial Military, The Colonial Fleet would be made up of the twelve colony current Fleet.

Even though this ideas met with wide spread support Admiral Stryker's next idea didn’t meet with such support. Stryker had an idea to create a single government for all twelve colonies that didn’t not sit well with anyone. Caprica, Gemenon, Sagittaron, and the other colonies didn’t want to be ruled by the same government However early in the war, the Battle of Artemisium Strait, which saw the Cylons inflict a great loss on the Colonial Fleet and leading to many of the twelve words, calling for a single united government.

Aquaria, Aerilon, Canceron, and Tauron, first signed the document in Aquarius City, which became the temporary capital of the First Colonial Government. Four weeks later, Picon, Scorpia, Virgon, and Leonis join and thus was born the Second Colonial Government, with its new capital being Queenstown on the planet Picon, after Aquarius City was nuked by the Cylon during the Second Battle of Aquaria. Three month later, Libran, Sagittaron, and Gemenon join the Colonial government.

Caprica, the sole remain independent colony, however finally join the Colonial Government, on that day which became known as Colonial Day, the Twelve Colonies of Kobol was officially born, some 52 years ago.It took six months from the time the Cylon revolted to Caprica joining for Stryker to created a single Colonial government and after much debate the new Capital was move from Queenstown to Caprica City, Caprica where it has remained until today, even though the Colonial Fleet Headquarters remain on Picon in the City of Kios.

After the war, Stryker settled on Picon. It in the city of Kios, where Fleet Headquarters, and Fleet Academy was place. He eventually married and has children and grandchildren. Four years before the fall and at the age of Ninety - Five, Stryker spoke out against the promoted of Commander Scott Tolan to Rear Admril says, "It was a dark day for the Colonial Fleet when a Tolan makes a Flag Offcier." He passed away a year later at the age of ninety six.

Jonas married Elizabeth around the time of the Cylon revolt. Elizabeth was from Picon and because of that Jonas settled in her home town of Kios . Jonas and Elizabeth had five children together, three girls and two boys. Jonas and Elizabeth argreed to live on Picon so Elizabeth could be close to her family however Jonas got his wish and would be burial on Aquaria with his wife beside him.

Alan Stryker born 32 BTF: Named after Commander Alan Wallace. Alan would go on to service in the Colonial Military, the only child of Stryker to do so, however he was forced to retire after an injury with the rank of Major. He now live on Aquaria and is the only member of the Stryker family to live on his father home colony which make his father very happy as he now had a reason to visit Aquaria. Jonas would spend much of his time during his last years on Aquaria with Alan, his wife and his granddaughter. He is aslo Mayor of Hyperion Bay and is married to a woman name Lauren have currently have five daughters.

Tonya married Glen Ferguson and had three children Jonas Carl 24 BTF; Mandy 18 BTF; and Robert 16 BTF. However shortly before the birth of Robert Tonya and Glen divorce leading to Tonya going back to using her madien name Stryker and that is the name all of her children used. Carl is the only one who really know his father as Mandy and Robert have never seen him before.

Alan Stryker and Lauren Stryker and have five daughter together Sarah, Rachel and Rebecca born 8 BTF and Carly and Kenly born 6 BTF.

Stryker is very close to Arthur Wallace because of Stryker connect to Alan Wallace.

During the Cylon War, Admiral Stryker wrote a list of rules that became known at the Stryker Doctrine

1: Even though the Cylon are machine never underestimate them or assume anything about their behavior.

2: Cylons will always have you outnumbered, get over it…so must rely on better tactics and strategy.

3: Do not fight a long battle with the Cylon…the longer the battle more it favors the Cylon.

4: Battlestars should never be unescorted. Without escort warships to proven support, Battlestars are more vulnerable to Cylon Raiders.

5: Battlestars should range from light to heavy, never build only one type; Lighter Battlestar should be built in greater number with heavier but fewer classes been used as command ships.

6: The Colonial Fleet should always maintain two hundred and forty Battlestars; any less will not allow a war to be fought both on the offense and defense sides.

7: Never fight a purely defense war, as the war will only result in a defeat.

8: No computer networks, all computers should operate independent from each others; networked computers are too easily hacked by the Cylons.

10: Move Fast, Think Faster you will live longer that way.

11: War is a risk; if you are unwilling to take risk during the war then there is no point in fighting that war because you have already lost the war.

At the time of the Fall, several of Stryker's rules had been violated, primarly rules six, as the Colonial Fleet only had one hundred and twenty Battlestar and rules eight, since all modern Battlestar had computer's network.

Two ships has been named for Stryker, the first one was an Orion Class Battlestar and the second is a Stryker Subclass (Titan Class) Battlestar. 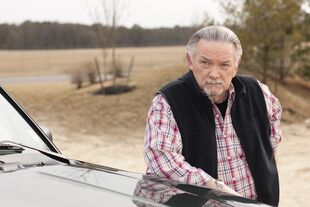 Jonas Ingram Stryker at his cabinet on Picon 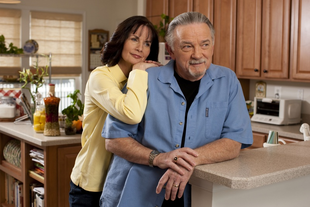 Elizabeth and Jonas Ingram Stryker at they home on Picon

Background, Cylon War' and Stryker Doctrines information was created by Allen Knott for Stryker (D8) but according to Wes Imlay is canon for the D5 version of Stryker.

Community content is available under CC-BY-SA unless otherwise noted.
Advertisement