The Galactica Type Battlestars was the most famous series of battlestar across the Colonies. They were laid down in the early days of the First Cylon War.

The Type was continually upgraded and modified over the years, and several were still in service until the Fall of the Twelve Colonies.

Block 1 "Jupiter Class"  was the standard production during the 1stCW. 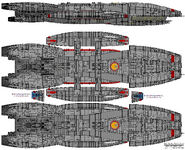 The Columbia Subclass was a Jupiter Class with additional armor plates. This subclass was first seen in Razor Flashbacks during Operation Raptor Talon.

The Galactica Subclass is the production variant of of the standard Block 1 seen in the first episode of "Blood and Chrome". It is intended as a command ship and is more armored and has more weapons than Block 1. The 12 missile silos were replaced with capital weapons. The Galactica and Prometheus Subclasses have additional capital weapons on the bow to replace the dual FLAK canons on the bow sides that have removed and replaced with armor plates.

The Prometheus Subclass is the production variant of of the standard Block 1 seen in the final episode of "Blood and Chrome". It is more armored and has more weapons than Block 1 and includes large anti-ship missile silos. The Galactica and Prometheus Subclasses have additional capital weapons on the bow to replace the dual FLAK canons on the bow sides that have removed and replaced with armor plates.

The Atlantia Type Battlestar was a command version of the Galactica Type.

There were originally twelve Block 1 built, one representing each of the Twelve Colonies of Kobol. They were heavily engaged in the war, and only three of the original twelve survived to see the armistice signed, ending the war. After the war, the surviving Battlestars remained in service, supplemented by additional ships under construction during the war.

Under construction during the First Cylon War, most off these vessels were not commissioned in time to see any action. Due to cutbacks, many vessel constructions were canceled. These vessels served at the heart of the fleet for another 20 years alongside the other classes.These vessels were slowly being phased out of service or rebuilt to Block 3 standards. By the time off the attack all had been retired to the reserve fleet or upgraded to Block 3 standards.

The ultimate representation of the Jupiter class, this group was classified as the Heracles class. With advances in FTL technology, the need to retract the flight pods to jump was eliminated, and the added space available was used for additional storage to extend endurance.

This is a small upgrade to the Block 3 that add missiles as a secondary anti-air defense.

Galactica type battlestars were of course equipped with FTL engine.

But each class has a different FTL class with the newer Classes being much more powerful than the old ones.

But when a ship is upgraded to a higher class there are two possible cases :

These classes have six main engines and numerous manoeuvring thrusters.

This has four main engines and numerous manoeuvring thrusters. The engines on this class are far more powerful than the one on older ships of this type because two engines were removed and the battlestars of this class have still more turn rate and speed than older versions.

During the First Cylon War, the Galactica type BLock 1 housed at least 5,000 crew and staff members on a fully operational ship, with many of these being support personnel such as Viper pilots, and Viper technicians.

That number is drastically reduced following the Armistice, with many mustering out of service, removing some equipments like the additionnal turrets and advancements in technology eliminating the need for certain service positions (for example, additional pilots gunners and techs). By the Fall of the Colonies,the Block 4 have a crew of no more than 2,900. In Galactica's case, it is suggested the ship is understaffed due to its decommissioning; however, the crew is still able to operate the battlestar, even in a time of war, with little to no loss of function so we can assume that it has a crew of 2500 (the starboard hangar is not functioning and some members of the crew were transfered to other ships before the ship would be decommissioned).

With advances in computer technologies, the crew needed to operate the Block 5 was reduced.

We can suppose that the crew number was 2400.

With advances in FTL, engineering and computer technologies  eliminating the need for certain service positions (for example, manned gun batteries), the crew needed to operate the Block 3 and 4 was reduced.

We can suppose that the crew number was 1800.

The Galactica and Prometheus Classes have three time more small crafts complement than on later Block 4,5,6.

The hangars on these classes looks all like the one seen in Blood and Chrome.

If we consider that a Block 1 standard complement is 70 small crafts with 3 Viper Squadrons and 1 Raptor Squadron.

To support the additional number of techs and pilots  Block 0,1,2,3 can have lacked some of its facilities:

The Block 1 "Jupiter Class",2 and 3 have a standard hangar capacity of 70 small crafts.

The small crafts complement is 3 Viper Squadrons and 1 Raptor Squadron (60 Vipers and 10 Raptors).

Retrieved from "https://galacticafanon.fandom.com/wiki/Galactica_Type_Battlestar_(D1)?oldid=14061"
Community content is available under CC-BY-SA unless otherwise noted.