Towards the end of the First Cylon War (FCW) the Cylons came to the conclusion that their Basestars as powerful as they were, were too slow and expensive to continue using. With their experimentation into the human genome they were able to create a life form that would become a vital piece in the creation of the new ship.

Hybrids were the Cylons first attempt into creation of a human like machine, which when first created seemed to be a step in the right direction. Creating a male model he would have limited capabilities but was able to speak to his makers in directing them into the right direction. Once they were completed they had decided to move the unit to present it to the Imperious Leader, something they were not expecting is once they jumped faster than light the Hybrid would forever change.

Transcending space and time altered the brain of the Hybrid allowing it to see a universe that its brain could not comprehend. Believing that the male would no longer serve a purpose it would be moved to a planet near the boarders of the colonies and Cylon space. By chance as he sat in his tub his hand fell out and landed into a new computer that the Cylons were testing, completely liquid based it allowed the Cylons to link to a system without being hindered by typing it would speed up their computing process but in this case allowed the Hybrid to communicate in a manner that only he could control.

With the possible application they connected him and the new system to a prototype ship that had design features to the Basestars they used during the war and that are now currently used. Showing great promise the Cylons sent a special team of Centurions called the Guardian Fleet to protect the model from being lost. Doing their job possibly to well when the Battlestar Columbus had engaged a Basestar above the planet the Guardians then decided to make run for it ensuring the protection of its primary asset and never being seen again the Cylons believed their new design was lost.

The male model results were good but deciding that a female model would possibly work better they decided to go with a different route creating the newer models with the help of Ellen and her crew, the mysterious Cylons from Kobol that promised to bring a new dawn towards the Cylons of the Colonies.

Tyrol a member of Ellen’s team was a master engineer utilizing the designs from the Guardian ship he added his own twist creating the Basestars that would rule the empire till the destruction of the colonies.

A third of the size of their older model the ship was faster and more agile than they could hope, plus with the organic material in its haul the ship became an extension of the Hybrids body. Very similar to the Raider the Hybrid would become the brain of the Basestar, and could resurrect just the same. The resources though would make it longer to replace than it smaller Raider ships but as long as the ship remained near the ship named the Hub or Colony the Basestar could eventually be resurrected.

With its compliment of Raiders and crew onboard one Basestar would be a very effective platform, also capable of flying in an atmosphere condition the ship could essentially land and become a base of operations for ground forces.

In the final days of the colonies there was a reported over a thousand Basestars that blanketed the skies. With their virus programs deep within the defense ministries database the Colonial Fleet would never have the opportunity to test their ships against the mighty Cylon invasion force, it is unknown without the program they could have still fought as glorious as the first Cylon War but never getting the chance the remaining human pockets would fight a desperate battle with the odds against them. 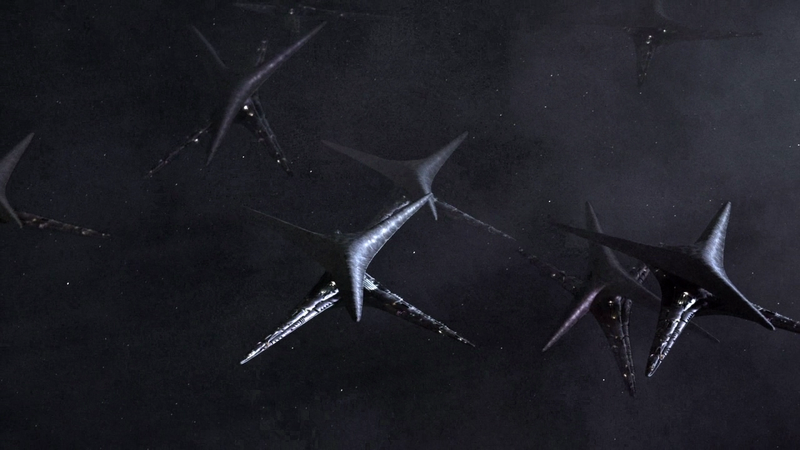 After the destruction of the Colony ship the Hybrids hearing the screams of the Hybrid Anders left the Cylon controlled space in search of the Hybrid mind that they believed would bring them through the gateway into another dimension. Searching space they found a similar mind a girl who could see and hear a language they could not, being half machine and human to include being able to speak and hear a language called Binary she has been able to guide them to the voice they once heard. While they work to bring him back online the girl Zero leads them guiding them until they can find the peace they so desperately want.

There are other models out there, ships that have been completed but space is vast and the their destination are unknown…

The Super Basestar is a Myth none have ever been seen, or at least no one has ever survived if they have.

The Predator Class was specially designed for ramming, the ship is designed to seperate in the middle allowing the ship to strike multiple targets.

Community content is available under CC-BY-SA unless otherwise noted.
Advertisement